BY MIKE VIOLETTE
Reproduced with permission of In Compliance Magazine
Original publication December 30, 2015

Back in my novice days, computers puttered along at 4.77 MHz and we rarely measured emissions above 200 MHz on the OATS. World trade in electronics was around $1B and cars got, on average, around 25 miles per gallon. The Voluntary Control Council for Interference by Information Technology Equipment (VCCI) was just being organized in Japan due to “radio disturbance problems caused by personal computers” and other gadgetry. One hundred companies formed the core of VCCI in 1985.

Jump forward 30 years and computer clocks zip along at one thousand times their forebears’ speeds, we routinely measure into the 10s of GHz. World trade in electronics is one hundred times the 1980s, CAFRE is better by 20 percent (seems like a meager increase—just my opinion) and VCCI boasts a membership of 1300 companies. And I am more than 6 dB older (6.8 dBY, to be exact).

We were honored to be guests of the VCCI during their recent 30-year anniversary conference and celebration in Tokyo, which included updates on Japan’s technology perspective, including mobile device growth, 5G, wireless power transfer and strategies for development of the Internet of Things. This article summarizes a few highlights of the Conference.

We also smacked open a barrel of nice sake, Kanpei!

Tokyo Tower stands at over 1000 feet above the sprawling, tidy metropolis of Japan’s capital city. The structure, built in 1958, “has proven to be a noteworthy testament to the ingenuity and triumph of the Japanese people.” It’s a cool Asian echo of the Eiffel Tower in Paris—and about the same height as La Dame de Fer—a beacon of the industrial and innovation power of Japan.

The VCCI (re-constituted as the VCCI Council in 2009) was established to put limits on radiated emissions and conducted emissions from computing equipment. By definition, the control measures are voluntary, but they have resulted in a successful program of compliance for electronic equipment sold on the Japanese market.

Mr. Keiichi Kawamaki, President of the VCCI Council, gave opening remarks to the conference, held at the United Nations University in downtown Tokyo.

The Council also performs market surveillance, testing about 100 different products every year. Compliance, they have found, is high. This probably represents a few aspects of the program: although the limits are voluntary, the members represent global brands that take compliance seriously; in addition, Japanese consumers expect very high quality products. Devices that are marked with the VCCI label are likely to be well-designed and manufactured well.

There were several other technical presentations at the Conference, which drew about 200 registrants from the US, Europe, Australia and Japan (of course). Mr. Masahiko Sawabe from the Ministry of Internal Affairs and Communications (MIC) summarized the “Present Status of the Use of Radio Waves” and an overview of “Wireless Power Transfer” technologies. 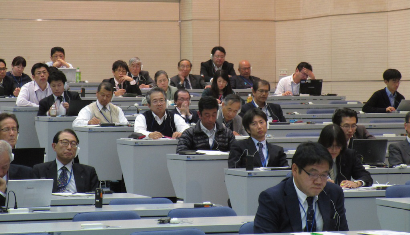 Sawabe-san told us that the number of wireless mobile devices in use in Japan exceeds 164 million units. The population of Japan is about 127 million, up from 120 million in 1985, a mere rise of 6% in thirty years time. The past couple of years have witnessed a decline in population with the fertility rate being less than replacement since 1975 (more on that later). More young’uns are needed.

One of the key milestones in Japan’s planning is the hosting of the 2020 Olympics. This sets a target for various infrastructure projects, including wider deployment of advances communication technology; Sawabe-san expects 5G to be ready by the year 2020 as data traffic approaches speeds of 10GB per-second, rivaling the speeds of fiber optic networks.

Other services that are envisioned include the impact of the Internet of Everything or Internet of Things that will use connectivity gains in electrical supplies, smart houses and smart cities. Japan’s aging population will also face challenges in its health care system; increased connectivity and mobile communication offer solutions including more use of remote diagnoses, virtual surgeons and robots to perform mundane tasks in health care providers’ facilities.

Further, the presentation summarized the implementation of Wireless Power Transfer (WPT) with implications for all manner of devices, from wearables to electric vehicles. Recent legislation has been moving through the Japanese rule-making process that addresses WPT that should be adopted by the end of 2015, with impacts on 6 MHz WPT system using resonance magnetic coupling and 400 kHz systems using electric field coupling method.

Ms. Yoshiko Tsuwaki, representing the Ministry of Economy, Trade and Industry (METI) provided a presentation on the implementation of the Internet of Things, which is affected by Japan’s public policy. Her presentation “Promotion Measures of Japanese Government Realizing IoT Society” summarized growth strategies in this sector as well as government policy designed to spur growth and realize Abenomics Stage 2, which enforces the economic policies and directives under current Prime Minister Shinzō Abe.

One example of the implementation of IoT in Japan is the deployment of driverless cars. This technology, which would require some of the physical deployment of envisioned 5G communications (vast interconnectivity, large data capacity and very low network latency), would address a very concrete potential problem, one which normally would cross my mind: shortage of drivers for taxis in rural areas. Other examples include construction management by drone observations to manage large projects and improve human safety by reducing the need for personnel in dangerous workplace conditions.

Other applications of the Internet of Machines, (IoM), is expanded deployment of robotics systems in manufacturing and the service industry. The notion, outlined by the planners, is that mundane repetitive jobs would be served by IoM-enabled systems, allowing humans to pursue more creative endeavors.

Estimates of the economic impact mount to over $11T by the year 2025, made up of gains and benefits in transportation, retail, healthcare, improved environmental quality and increased energy and machine efficiency.

A crucible, of sorts, for IoT implementation is the establishment of IoT Promotion Laboratory which was started in October 2015 and held in Tokyo. The program, a forum, really, drew over 900 global companies to develop the practical use of IoT in various fields and develop a membership platform for further innovation.

The conference concluded with a social get together where the biggest vessel of Sake was served, bashed open with great ceremony and poured in commemorative traditional wooden cups.

Thirty years is a long time, especially given the rate-of-change in technology and society. It will be interesting to attend the 60th Anniversary in 2045. My guess is that the Tokyo Tower will still be there; I’ll grab a driverless taxi to go have a look. 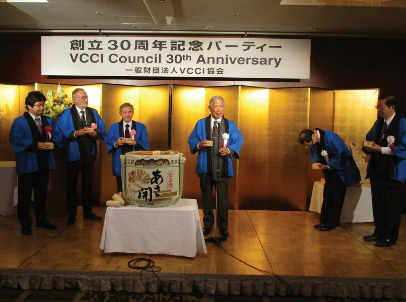