What does it mean for Chinese Wireless Manufacturers?

The new Radio Equipment Directive will be in-force in June 2017. Wireless manufacturers that sell to Europe must be ready for the change.

The European Commission overhauled the requirements for Radio Devices, i.e., transmitters, receivers and transceivers back in 2014; but work on this began on the changes many years before that. The transition to the new Radio Equipment Directive 2014/53/EU will be complete, sort of, by June 13, 2017. Effective that date transmitters, receivers and transceivers used for radio communication or radio determination will have to comply with the new Directive—even legacy equipment that was approved under the outgoing R&TTE Directive 1999/5/EC.

Radio manufacturers and labs need to start planning for this transition now, or risk being rejected at customs.

The problem is that the route to compliance is often very simple, or can become a little convoluted. This article details the reasons the time-honored Self-Declaration may not work for everyone, at least in the short- to medium term. We also cover a route you can pursue that will let you use the new RED in advance of the June date.

The following aspects of equipment compliance are covered by the RED:

Radio: Traditional spectrum matters, frequency, power and spurious emissions limitations that are meant to make sure the spectrum is well-behaved. The specific language in the Directive[i] that defines the scope is: “Equipment which intentionally emits or receives radio waves for the purpose of radio communication or radio-determination [and] makes systematic use of radio spectrum.”

Safety: Product safety, including electrical safety and RF Exposure, primarily. RED references requirements equivalent to the Low Voltage Directive 2014/35/EU  (LVD) and equipment must comply. However, manufacturers should not state compliance with the LVD.

EMC: RED references requirements equivalent to the EMC Directive 2014/30/EU. As with the LVD, one needs to comply with the requirements of EMC, but shan’t reference it on any Declaration of Conformity (DoC).

These essential requirements haven’t fundamentally changed from the R&TTE Directive. The RED was updated because “Directive 1999/5/EC of the European Parliament and of the Council (3) has been substantially amended several times. Since further amendments are to be made, it should be replaced in the interests of clarity.”

Several of these clarifications include:

The above clarifications are necessary updates and improves the process for conformance with the Directives. What has not been fully implemented are the standards that manufacturers need to reference when testing their devices.

This is a bit of a problem.

At first glance, it may seem that the technical requirements really didn’t change all that much, so there would be no real design implications. However, the inclusion of terms like “efficient use of spectrum” has led to changes in the test cases needed to demonstrate compliance. Efficient use of spectrum can be demonstrated through good performance receivers and spectrum sharing transmitters. There are therefore testing implications to prove those operations. This has led to significant changes to the test standards. However, very few standards have, to-date, been enacted for manufactures to follow.

Where are the European Standards?

The usual route for manufacturers since the beginning of the New Approach during the halcyon 1990s has been self-declaration to the Directive, by applying “Harmonised Standards” or ENs. These are standards that apply to specific equipment and everyone[ii] agrees are reasonable to prove conformity. That is, if a manufacturer applies the correct ENs, then a simple self-declaration and one is finished.

In the dynamic world of CE, the standards that are used for the “presumption of conformity” are listed in the public domain in the Official Journal (OJ) of the European Commission. With the advent of the RED, many ENs have not yet been updated and added to the OJ for compliance. No ENs, no self-declaration, no CE.

So what’s a good radio manufacturer to do? This is where the role of the Notified Bodies (NBs) comes in.

Whilst updating the requirements for Radio Devices, the Commission also raised the bar for something called “Notified Bodies.”  NBs are private-sector organizations that have been blessed by their respective countries to “approve” equipment under the EU system.

Under the RED, organisations who wish to have this designation must be accredited under either ISO 17065 or ISO 17020. This process is a formal audit program carried out by Accreditation Bodies (ABs) that are designated, I suppose that’s the word, by National Authorities in each member state or MRA country.

The National Institute for Standards and Technology (NIST) is the go-to in the US. NIST also deals with conformity assessment aspects under Mutual Recognition Arrangements. Under the US-EU MRA—more alphabet soup—US organizations that meet certain criteria enjoy the same status as European Notified Bodies (for related article dealing with MRA issues, refer to InCompliance Magazine from July 2016.

Now, back to the dilemma of the manufacturer.

Type Examination Certificate to the Rescue

It’s simple really. Under the structure, the NBs have the demonstrated competence and expertise to review the product, reference standards that would reasonably apply and issue the certificate. The Notified Body is basically stating that the device does meet the requirements of the RED, even though full testing to harmonised EN standards was not performed.

The process goes in a flow as shown in the figure. 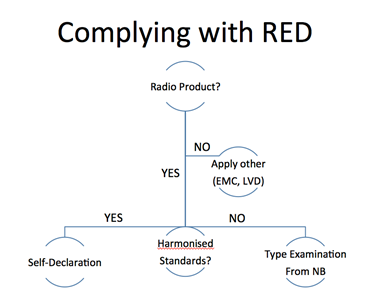 Figure 1: Route to Conformity with RED

The output is a Type Examination Certificate that must include some specific information, namely:

Typically, a Type Examination Certificate will reference the standards used for assessment, the test reports and other technical documentation used for the review and specifics on the operating frequencies and output powers and modulations that the radio will use.

(Note that applying ENs that are listed in the OJ for the R&TTED is not allowed in most cases, as the technical requirements have changed. To apply a harmonised EN, it must be an EN which is listed in the OJ for the RED, not the R&TTED.
If a type examination certificate is used, the Notified Body will be looking for the product to meet the RE Directive through testing equivalent to those new RED standards, including the additional receiver and spectrum sharing tests; and not to just rubber-stamp an upgrade to your old R&TTE test reports.)

June 12, 2017 will come quickly, so if you’re dealing radios to the EU, it is time to map out a compliance strategy that will keep the door open. It is not possible to guarantee that all the work to place Harmonised Standards into the OJ will be finished in time. In fact there are specific standards that have been announced “won’t be ready.” That’s just the reality.

Equipment with a “Low Level of Compliance”

Article 5 of the RED states this interesting requirement: “As from 12 June 2018, manufacturers shall register radio equipment types within categories of radio equipment affected by a low level of compliance…” This requirement carries with it the notion of a Registration Number, a central system and equipment marking specifics. The status of this system, however, is unknown and it is a question whether this will be ready in time, what equipment would have to be registered. The interesting thing is that this is the first time equipment registration has been formally considered. With Christmas coming, it would be wise to stay off that naughty list!

[ii] Well, maybe not everyone

RED FAQ’s Contact us for more information about RED