On Symbology: This “AND” That and the King Named Cat


Most electronics types can speak aloud the title of this piece, though they may not know who the Cat King is. The pattern of lines and curves between “This” and “That” have carved out a special place in our long-term memory—at least those that spent any time wiring logic gates (figuratively or literally).

This is an iconic symbol of the digital engineering world; it is an “AND” gate.  AND is kind of like the truth gate, all inputs must be “TRUE” if the output is to be “TRUE.” Like other matters in life, such as marriage, pure harmonies, reasonable business arrangements and some philosophies, everything must be agreeable for the Boolean arrangement to be ONE.

Conversely, a simple modification to the AND system (a small circle on the ‘output’) inverts the entire truth table and we have a NAND. Thus, digital designers dot logic diagrams with ANDs, NANDs and derivative symbols and create arrays that have fundamentally changed our lives.

Many notations abound in our engineering world. We can instantly recognize the symbol shown to the right when we “read” a schematic. The symbol shortcuts the lengthy description, first described in May 28, 1948 Bell Labs Memo1, thus: “Transistor. This is an abbreviated combination of the words transconductance or transfer, and varistor. The device logically belongs in the varistor family, and has the transconductance or transfer impedance of a device having gain, so that this combination is descriptive.”

A simple symbol says it all.

A Case of Mistaken Symbology

Symbols abound in cultural identification, literature, superstition, worship, signs, warnings and cautions (especially In Compliance work). Symbols have moved millions to action. Sometimes, confusion over symbols and the connection to mythology can lead to an unkind outcome.

To wit, Captain James Cook (1728-1779) spent a couple of fine weeks in Hawai’i welcomed and honored, revered as a god. Apparently, the vision of the white sails floating in from the sea stirred up a local myth and they greeted him as visiting deity. 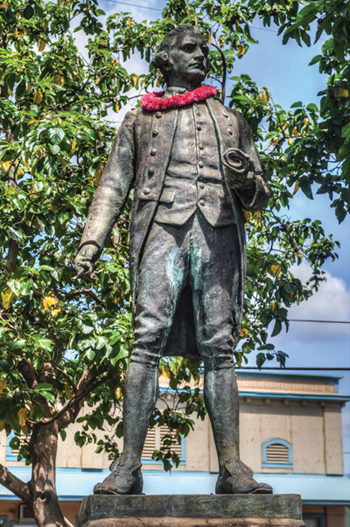 On this journey aboard HMS Endeavour, (Cook’s third voyage of discovery to seek the hidden Northwest Passage: hard frozen in his time but apparently open for business in ours), he managed to “discover” Hawai’i, the first Englishman to make contact on this most remote island archipelago. (He was not the first westerner, though, to chart the “Sandwich Islands” as he apparently used Spanish maps dating back to the mid-sixteenth century.)

Unfortunately, he overstayed his welcome, the Natives decided the truth didn’t match their mythology; a fracas arose and the good Captain was clubbed and stabbed to death in the surf of Kealakekua Bay. In the manner of the native custom, the English explorer’s body was baked and his bones distributed as sacred relics, for although there was a misunderstanding, he still bore a god-like aura to the Natives.

In a recent RE we investigated the sense of smell and its impact on behavior, memory and the emotional context associated with our senses. My friend Mitchell Lazarus informs on the connection between sense and the evolution of the cerebral cortex. (In Compliance Magazine, November 2014), thus:

“…one bit of anatomy particularly fascinated me: mammalian cerebral cortex evolved out of reptilian olfactory tissue, with the result that, in us mammals, the sense of smell makes its first synaptic contact directly into the cortex. Every other sense first has to relay through the thalamus. You make the point that smells have a unique ability to trigger old memories and emotional associations. Some theorists speculate this is because of priority access to the cortex.”

So smells go directly to our cortex— that “priority access.” Imagery, however, is processed through the thalamus and set aside into long-term memory by the work of the hippocampus. This was examined just a year ago in these pages, wherein we examined learning (January 2013).

Images, too, connect not just with cold reason like the logic gate, but with our emotional centers. For example, the use of “emoticons” in contemporary communications can convey happiness, sadness, confusion, frustration and disappointment all with a couple of letters and punctuation marks. Little shortcuts pepper our texts ; )

Ding-Dong, the Witch is Dead

Images, like emoticons in popular culture, can elicit strong reactions and memories. Just the sight of a swastika, for example, triggers fear, revulsion, anger and incalculable grief. They can just give you the heebie-jeebies. 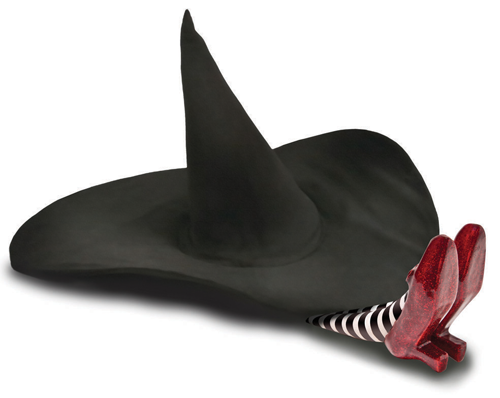 Dating myself, The Wizard of Oz (before the access of always-on internet series of tubes) used to arrive via VHF signals to rabbit ears on our flickering RCA. One of the images that spooked my young mind was the curling of the stockinged legs of the Wicked Witch of the East, upon whom Dorothy’s house came to land who then received those magic Ruby Slippers.

This iconic scene of the death of the Munchkins’ tormentor (she lately somewhat sympathetically reformed in “Wicked: The Untold Story of the Witches of Oz”) is a powerful symbol of the end of tyranny in Oz. But, as is known, the relief is short-lived: there is still the other Wicked Witch. It’s not a little like the elimination of Bin Laden in May 2011—singing Ding Dong…was not the end of the story.

Symbols can represent permanence and evanescence.

The George Washington Masonic National Memorial rises on Shuters Hill in Alexandria with a powerful view of the Nation’s Capitol. The belief system of the Freemasons, a secular organization with roots in England, is replete with symbols and the very edifice is a symbol of the connection between our Earth-bound existence and the desire to thrust to heaven, a “lighthouse to Washington,”2 a shrine to the “father of our country,” a practicing Mason. It is open most days to the general public. 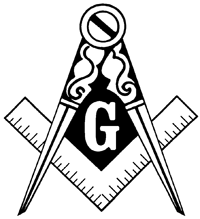 Masons, being engineers by inference, are builders, but of stuff that is not always physical. The symbology and rites are part of the building process.

Thus, it is no surprise that the symbols are common in entry-level drafting classes (well, maybe not so much anymore, but I still have my T-Square and my dad’s drafting kit.). The elements of the principal Masonic symbol include a square, a compass or divider, and the letter “G.”

“The square is the symbol of the human soul, create “square,” perfect, though invested with freedom of choice and capacity for error.”3 (Measurement uncertainty, anyone?) The compass represents the soul, “its functional energy or fire.”

To be a Mason (and I am not one, nor an expert) one must ascribe to the belief of a higher being. It is the foundation of the organization’s belief system. Thus, the letter “G” represents God or Geometry and its position in the center of the Masonic imagery illustrates its importance in the entire belief system.

In Masonic themes, the purpose of the study and practice of the rites and importance of the symbology is for self-knowledge and self-improvement (never mind the malignment and trashing of the order by conspiracies featured in pop films and novels). The Masons aspire to be “king” of their own minds. The symbols represent the context and goals and the degrees represent progress towards those goals.

SO, WHO IS THIS CAT KING?

Some readers of ICM know of my Far East wanderings, notably my long-ingrained Sinophilia. There is much symbology in the written “word” in the Chinese written language (and its derivatives). The language is hieroglyphic, entirely non-phonetic and rich in homophones. It is also an evocative written language. The origins of written Chinese language trace back 3500 years or so, with the first characters scratched onto so-called “oracle bones,” traced onto animal bones and shells. These figures are fanciful representations of common objects: animals, objects, people and actions, some of which still present their “DNA” to the modern construct. My favorite character is “fire” (huo) which looks like this: 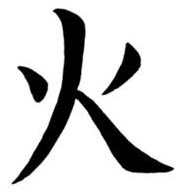 The character is composed of the word for “person” (ren) with two additional tics. Looks, to me, like a guy on fire. Other words also contain emotional import: the word for “good” (hǎo) is the combination of the characters for boy and girl. The word for peace is represented by the symbol of a woman under a roof.

All of these symbols (perhaps 20,000 or more) were constructed to define the creation of human thought, societal order and philosophy. The hierarchy of the Emperors, considered near-Gods themselves, was established long ago. The various dynasties rose and ebbed (the oracle bones were first associated with the Shang Dynasty.). The language evolved. Obviously words were necessary to describe the social and command hierarchy of the dynasty. At the highest sat the emperor. At the lowest ranks are the commoners, the workers. Thus, some of the oldest characters represent “worker” and “king.”

Worker is “gong.” King is “wang.” These symbols are very nearly the same, with a simple horizontal slash changing the entire meaning. Sometimes a single stroke can make a man a god. 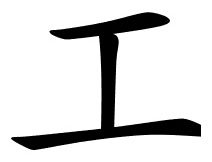 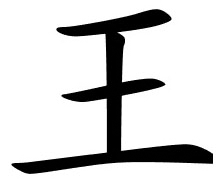 Speaking of kings, The Cat King was born on January 8, 1935 and died on August 16, 1977, a King that Vegas–and the rest of the world–knew well. In China he is known as 猫王 (māo wáng) and is featured on karaoke menus all over the country.

“The King of Rock and Roll.” Somehow, the “cat” part of his name derived from him being known as the “Hillbilly Cat,” so informs my dear friend in Beijing. Combining “Cat” with “King”. Voilà!

Language, symbols, and graphic representations abound. In our work we use symbols all the time to convey meaning. In the broader world, symbols can be trivial; they can also be profound.

Elvis has left the building.