Radiometers are cool. Some are so cool they are cryogenically cool. They have to be really cool to do what they do. This is especially true for a bird called WindSat, a project that gave me a new appreciation for fragments of decibels and the remarkable engineering precision that is needed to “see the wind.”

How can you see the wind from space? And why would one? A few reasons to know what the wind is up to: storm-tracking, navigation needs, weather predication, and measuring climate change impact, to name a few. The Navy, in particular, is very interested in the shift of ocean breezes as it can greatly affect the movement of massive floating assets around the globe.

The question is: How to do?

The answer is? Radiometry.

Innovations in electronics, radio frequency engineering, satellite technology and earth science converge within the area of Remote Sensing, which uses portions of the electromagnetic spectrum to image, measure and analyze at a distance. The techniques are used heavily in astronomy and, more and more, in observations of our planet.

A simple radiometer can be had for $12.99. Putting the thing in the Sun spins the vanes in a partial vacuum. The energy from the Sun heats the black side of the vanes slightly, the heated air molecules move away from the vane, and, to keep Newton happy, the vanes spin, suspended on a low-friction support. The spin rate depends on the amount of energy (sunlight) that hits the device (Figure 1, video below).

Willie and his radiometer

For space-based observations, the energy that is reflected back from the Earth’s surface can be gathered and measured, which allows a “picture” of the Earth to be developed. It just takes a few quanta of understanding.

In the year 1900, Max Planck figured out the mathematical distribution for this energy and applied it to describe black-body radiation, which is the spectral energy that is emitted by, naturally enough, black bodies in thermal equilibrium. 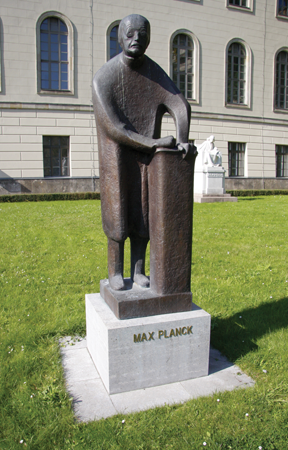 Max postulated that the energy is directly proportional to frequency as E = hf, where h is Planck’s constant (note: if you make up a formula, you get to name a constant after yourself), which is a teeny tiny number: 6.624 X 10-34 joule-seconds (f is the frequency in Hertz).

E then reduces simply to joules, a unit of energy. Max later developed an empirical model of black body radiation that is too complex to try to type up on my Mac, so I’ll let you have a look yourself at the 420,000 Google returns you’ll get if you search on “Planck’s Law.”

Over a given area and frequency band, the energy unit is the spectral radiance, which is quantified as watts per steradian per square meter, which is a term that describes the energy flux over a certain amount of space. In the microwave region, it’s tiny, but can be measured with the right radio receivers.

According to the science used to gather information about the wind at the surface of the planet (which can be used to measure other physical parameters such as soil moisture and ice coverage), performing polarimetric radiometry measurement yields something called the “Stokes Vector” or “Stokes Parameters” (see Figure 3).

These parameters describe the polarization properties of the emitted radiation, which are essentially Cartesian representation of the wind vector plus a rotational component.(1)

The broadband energy that the Earth returns to space every second is a form of emissions that can be parsed into various frequency bands. The frequencies that best reveal wind data are in the 10 to 37 GHz range. Windsat, mentioned previously, has a horn feed bench that sips energy off a 1.8 m reflector. Thing is, to collect enough energy to make a good measurement, the bandwidths are whoppingly large, up to 2 GHz at the higher frequencies. Talk about a wide-open front end!

Our experience with flying radiometers was a dozen or so years ago. The Windsat project was developed by the Naval Research Center and launched in 2003 aboard a Titan II rocket as the primary payload of the Coriolis mission.(2)

The Windsat satellite runs around the planet in a more-or-less polar orbit at 830 km and is in a “Sun Synchronous Orbit” which means that her flight is tuned for maximum sunlight on the Earth, except for ‘eclipse season’ which occurs a little less than a quarter of a year. It takes the spacecraft just about 100 minutes to go 25,000 miles, which is a 16,000 miles per hour clip. Meanwhile, the craft rotates once every 2 seconds, taking a peak into deep space “cold sky” as a calibration reference point.

By scanning the surface of the earth as it rotates under her, Windsat can image 83% of the Earth’s surface in one day. To get the remaining patches, a full four days are necessary (see Figure 4). A “swath” of 1400 km is imaged on each path, and the images are merged over multiple passes.(3) 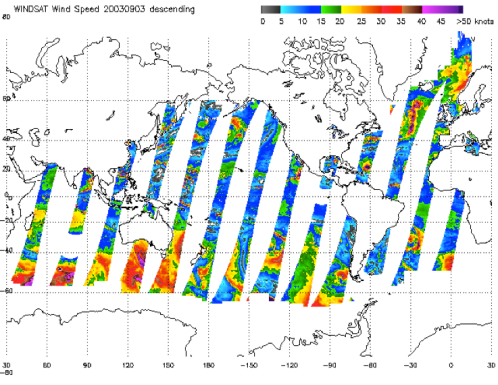 Our work was on the EMC review of the spacecraft design during Preliminary Design Review (PDR). In addition to the normal EMC stuff (antenna coupling predictions, test specification writing) we were to take a look at system noise calculations.

Receiver performance is limited by the amount of self-generated noise in the receiver electronics. This is due to the kTB thermal noise caused by the electronics bumping around, which is proportional to the physical temperature of the device. So, it is customary to rate communications receiver sensitivity in terms of noise temperature, which is related to noise figure.

Noise figure and noise temperature are related where:

Where TRef is a reference temperature, typically 290K (around 17°C).

The lower the noise temperature/figure, the lower a signal the system can measure. At absolute zero, theoretically, the noise figure goes to zero.

Here’s where it gets a little crazy…

As you might imagine, the wind whipping on the surface of the planet some 500 miles away doesn’t throw off much radiation energy.  To gather those RF whispers, the receivers are super sensitive. Control of noise figure is paramount. To give an idea of the miniscule amount of radiation that is made by the wind, a glance at the specifications for the receiver noise temperatures is interesting. For each of the bands, stretching from 6.8 GHz to 37 GHz, the specified noise temperature is less than 0.2K, zero K being as low as you can go.

When Norm was crunching the numbers on these calculations, on layers of legal pads, I was incredulous. Why carry the dB calculations out to four decimal points? In EMC, we often throw out anything after the “.”.

TBT, if you lose a part of a dB somewhere in a radiometer, your readings will be crushed.

For EMC engineers, decibels are a little like sand, plentiful and cheap. If you lose or gain a handful here or there, it really doesn’t matter that much. But for radiometer engineers, dBs are like jewels: you watch every carat, even down to the millibel.

Windsat was originally designed to fly for three years. After 11 years, according to Windsat’s web page, “WindSat is operating normally.” Really cool.

Reproduced with permission of IN Compliance Magazine
Original publication June 2014