How to Kow-Tow without Banging – or Losing – Your Head


If coffee is the fuel of business, beer is lubrication, so says my brother-in-law. It is over drinks and the breaking of bread that bonds are formed and this is no less true in China, where beer-drinking has been around for nine millennia, plenty of time to hone techniques for making brew, not to mention traditions for enjoying pi jiu with friends.

The traditions that have evolved are time-honored and infused with protocols. At a gathering of two or more, it is traditional to toast, nearly every time you take a sip, in contrast to the western practice of nursing a drink and toasting maybe once or twice during a meal. When toasting a person of higher rank, either socially or economically, the person of lesser status is careful to go low, tapping the superior’s glass below the rim of his or her glass.

This is one practice that I’ve seen performed reductio ad absurdum between companions who respectfully try to angle for the lower position until the glasses are nearly at the floor-level, playing a game of humble chicken. There’s also the sometimes grueling, (often delightful) challenge of gan bei or “dry glass” – bottoms-up! – the cause of millions of epic hangovers. Survival in China depends mightily on a solid constitution (to this I owe my Irish side) and a strong liver. 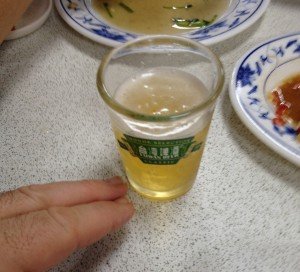 Another ritual of the drink (and it can be any drink, tea if you like) is to top up your companions’ glasses, and to acknowledge the courtesy, tap-tapping two fingers on the means “thanks.” It is subtle and sublime. One of my buddies (a “ge men”), Mr. Yong, a gentleman from Xi’an who now resides in Beijing, gave me the scoop.

“Henry,” his western name, reminded me that China’s protocols were developed over a few thousand years of practice and tradition and are deeply ingrained and steeped with its formal hierarchy and classes. To explain the double-tap, Henry gave a short history lesson: One of the practices of the all-powerful emperors was the demand for tribute from surrounding countries that were either desirous of having lucrative trade with the enormous country or who were in need of her protection. To affect this tribute, the country seeking the emperor’s indulgence would send emissaries to greet him at his palace.

The visitors were led through several formal stages until they entered the inner sanctum where the emperor held court (in Beijing, the “Forbidden City” referred to the place that mere mortals were forbidden to trod). Upon entering the presence of the emperor, the nearest thing to God-on-Earth, the tributees would lay prostrate and bang their foreheads on the floor, performing the ceremonial “kow-tow” (literally, “bang head”).

Servants and various courtesans were also required to show the same respect in the presence of the emperor. Kneeling, bowing and kow-towing and never turning your backside to the anointed one was the way to keep your own head.

This is where reverential kow-tow and a gesture born of this practice converge in modern gatherings where a drink is shared.

Henry continued: Born in 1711, Emperor Qian Long was a long-lasting ruler of China, who ran the Middle Kingdom from 1735 until he abdicated at the ripe old age of 85. He had a storied rule lasting just a bit over six decades (a very long time by any measure). He led conquests of consolidation, was a patron of the arts and simultaneously expanded and censored literature and ideas.

One day, he decided to go on a walk-about. 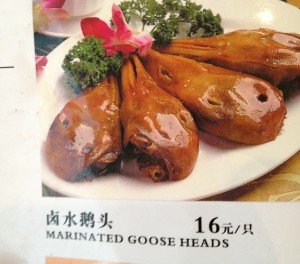 Goose Heads (About 75 cents a piece in Xi’an)

According to legend, Qian Long desired to explore the country in disguise to assess the situation in his vast empire. Dressed in peasant garb and attended by one of his eunuchs, he set out from his palace and traveled simply. He stayed in local inns, ate local foods and drank with peasant farmers who told of their struggles and their joys.

In these casual encounters, Qian Long forbade his servant to kow-tow in his presence, such a gesture being a dead giveaway to his eminence. However, conditioned in the ways of the Chinese court, his attendant was concerned that he showed proper respect to the almighty Emperor. They reached a compromise: The emperor and the eunuch decided that a suitable gesture would be a simple tap on the table, sufficient to acknowledge the ‘kow’, without involving the ‘tow’.

Hence, the two-fingered kow-tow was born, a charming, simple gesture and a hundreds-year-old tradition that is repeated millions of times a day. Practice it with some Chinese friends and impress them with a casual, but respectful kow-two, without the forehead smash. Forgetting to show proper respect probably wouldn’t doom a modern traveler, but ya never know, you wouldn’t want to end up like these guys: