“I love fools’ experiments. I am always making them.”¹
– Charles Darwin

To discover anything new, one has to be ready to be fooled as sometimes the experiment fools the experimenter. One, too, must be ready to be surprised and draw new inferences when results don’t quite work out the way one had hoped. The real fool won’t change their perspective when faced with facts.

Tucked away in the Library of Congress lies a thin, yellowing volume of just over 100 pages. “Experiments Made by A. Graham Bell, (Vol. 1)” is in the American Treasures Archive of the Library and it chronicles the trials and errors of experimentation in telephony. The first entry in this particular treasure was writ simply thus: “October 1875.” 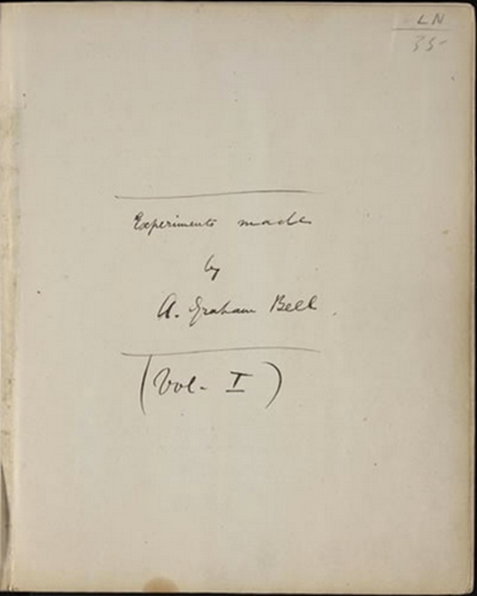 Bell was drawn to the difficulties of the deaf and hard-of-hearing by his wife and his mother’s ailments. He was keen to understand the pathology of deafness and its remedies. This, naturally, led him to investigate the connection between electric current and acoustic energy.

The opening illustrations show some kind of arrangement of electromagnets and the placement of a horseshoe magnet in proximity to a wound coil solenoid is meant to induce some reaction in the electromagnet connected some distance away. I take it that he was trying to stimulate the current flow in the circuit to act on the distant electromagnet.  (Figure 2) 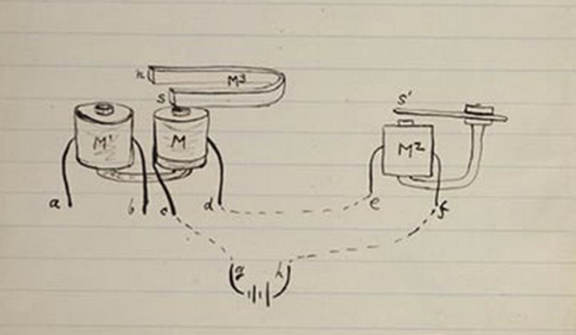 Batteries, by that time, had been around for three-quarters of a century, invented in 1799 by the Italian Count Alessandro Volta, who devised the voltaic pile to provide a continuous source of electric current. Volta, curiously, had not intended to create a device to create DC, but ‘merely wanted to show his friend Luigi Galvani was wrong.’ (Typical engineer-type) ‘Galvani believed that the electricity by which he had made dead frogs’ legs twitch came from animal tissue but Volta thought it was generated by chemical reaction between different metals in a circuit.’²

Like all great tinkerers and “natural philosophers,” Bell tried all kinds of common materials, metal, wood, fibers and stuff that might be available at the local apothecary. He collected all manner of materials and was peripatetic; one entry, late in the notebook, Bell visited various stereotyping and electrotyping establishments in Boston in search of ideas.

Inventors were only bound by their imagination and availability of material. This was pre-quantum mechanics, of course, but new elements were being found at a rapid rate and used in the early applications of material science. The Washington Monument was being constructed during this period. Aluminum, so common we toss it in the trash when our beer is gone, was a rare and precious material and so dear (moreso than gold at the time) that the top of the Monument is capped with a pyramid of the metal.

Bell sketched out various arrangements, tinkering on paper and in his head, with many drawings depicted in pseudo-3D, a mix of schematic representation and shaded shaped objects.

His first measure of success involved a brass strip, a cork, a bowl of water and an electromagnetic with a strip of metal as the speaker. “It is difficult to describe the noise heard as it is unlike any sound I have hear from magnet before. It partakes much of the character of a kiss.”  (Figure 3)

His entries pay no mind to the days of the week and many notations are made on a Saturday or a Sunday. Al’s Notebook covers his efforts from October 1875 to his last entry on April 16, 1876 (a Sunday). Others mentioned in the running script include his assistant Mr. Watson, a Professor Hartford and a fellow named Stanley.

The arc of his efforts can be tracked from his opening idea set of assumptions, notably, early in the notebook, this phrase: Yesterday Mr. McMahon suggested a device for a new transmitting style for autograph telegraph.

Now the telegraph had been dash-dotting for forty years already and transmission lines were strung between major metropolitan areas throughout the world. Samuel Morse codified his famous digital representation of letters and various versions of the telegraph, including one that sent a pulse of energy that burned a piece of paper on the receiving end.

His experiments commenced with reproducing the action of the telegraph using various devices and connections. He laboriously recorded his measurements, using different numbers of battery cells, materials and even mimicking and sketching AC behavior versus time, looking much like an early screen-shot of an oscilloscope.  (Figure 4) 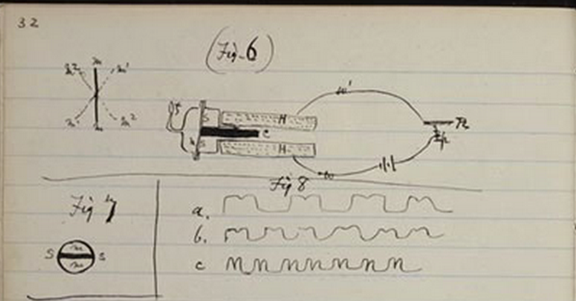 His notion of sending pulses of energy, with some kind of transducer on the other end acting as a receiver, is first laid out on page 23, which records a flurry of activity starting on February 22, 1876.

He knew he was getting close.

Bell’s large achievement was to figure that an acoustic to electrical transducer was key to his invention of the telephone. Equally important was the electrical to acoustic transducer on the receiver end.

To this, as suggested by the illustration in Figure 5, he put his efforts. 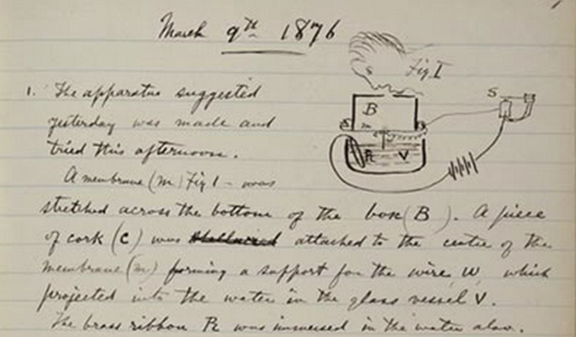 The text dated March 9, 1876 goes “The apparatus suggested yesterday was made and tried this afternoon. A membrane (M) Fig 1, was stretched across the bottom of the box (B). A piece of cork (C) was attached to the center of the membrane (M) forming a support for the wire, W, which projected into the water in the glass vessel (V). The brass ribbon (R) was immersed in the water also.”

His notion, it seems, was to amplitude-modulate the direct current that was flowing in the circuit. One imagines the low levels of current he was trying to command.

He continues: “Upon singing into the box (B), the pitch of the voice is clearly audible from S, which later was places in another room.”

On this page the text seems dense and tight, with phrases crossed out as if he was struggling to find the words to describe what he was observing—and creating, Bell’s excitement flowing from the pages of the notebook.

“When Mr. Watson counted—I fancied I could perceive the articulations ‘one, two, three, four, five’—but this may have been fancy, as I knew beforehand what to expect. However, that may be I am certain that the inflection of the voice was represented.”

What is remarkable about this moment in time is the ability to conjure a working demonstration, his “apparatus” from wire, water, cork and brass. Not unlike his contemporaries plucking an engineered item out the nature of energy, electricity and simple matter. 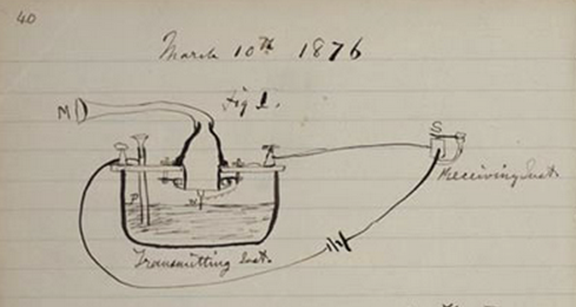 “I then shouted into M [the mouthpiece] the following sentence: ‘Mr. Watson—come here—I want to see you.’ To my delight he came and declared that he had heard and understood what I said.”

And like the good experimenter he was, Bell “asked him to repeat the words You said ‘Mr. Watson—come here—I want to see you.’”

The notebook continues for another sixty pages, with refinements in Bell’s setups and musings on the underlying physics of what he was observing. He played with different solutions in the bowl, including cod liver oil (no sound), cod liver oil + SO4(no sound), salt water (loud sound), mercury (complete contact—no good) and ‘the liquor’ (loud sound).

Alexander Graham Bell worked in many other areas during the ‘golden age’ of industrialization. His areas of interest included optics and aeronautics and he collaborated with the early innovators in aviation. He is also credited with building the first metal detector.

Ironically, he did would not have a phone in his study as he did not want to be interrupted. I wonder if he’d respond to a text message?

All of the images from Al’s Notebook can be found at the following website: http://www.loc.gov/exhibits/treasures/trr002.html

Reproduced with permission of IN Compliance Magazine
Original publication July 2014