Long before EMC was his interest and, I daresay, his passion, Dad flew airplanes for a living. It was during an era unto its own. Norm had a load of stories and loved to tell them, throwing in an occasional embellishment. His flight training was in Big Spring, Texas “where elephants went to die,” as he would say. Four or so thousand hours of flight time included the fast and high kind of flying and low and slow kind. In either case, flying airplanes takes loads of preparation. 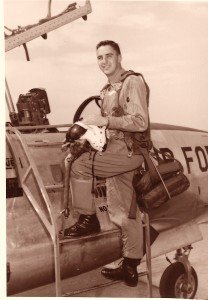 But before we get to that, a bit more about planes. One of the planes my Dad liked to reminisce about was the F-106 Delta Dart and when you kicked that afterburner, man did you go! With a landing approach speed of 180 knots, it was a fun plane to fly.

Peruse airplane collections and designs from the late 50s and 60s and one finds a veritable box of chocolates of flying machines. Contrary to the Swiss Army-Knife approach of today’s   procurement—witness the F-35 Joint Strike Fighter where a single design concept forms a platform for all the services—the heydays of experimental airplane design gave birth to dozens of different birds of various breeding: engineering Darwinism.

Models such as the F-80, F-100 and their derivatives were rolled quickly through development and into (oftentimes brief) production. The pioneering designs that came out of the adolescent jet age demanded that designers and engineers bang together real hardware to be built, tested, proved (and crashed). Research into aerodynamics, propulsion and materials science leaned heavily on the trial and error method. Contrast this with today’s reliance on computer modeling and simulation to design complex airframes that give agility and stealth to multi-multi-million dollar airplanes. No matter, whether on the test stand or in RAM, it’s all Real Engineering.

Lockheed-Martin’s Skunkworks has been a cradle of airplane design since the 1950s (and is the birthplace   of the remarkable still-flying U2, the *maybe* retired   SR-71 Blackbird spy planes and, more recently, the F-35). Much of the material science for high-flying faster-than sound and radar invisibility came out of the sprawling complex near Palmdale, CA.